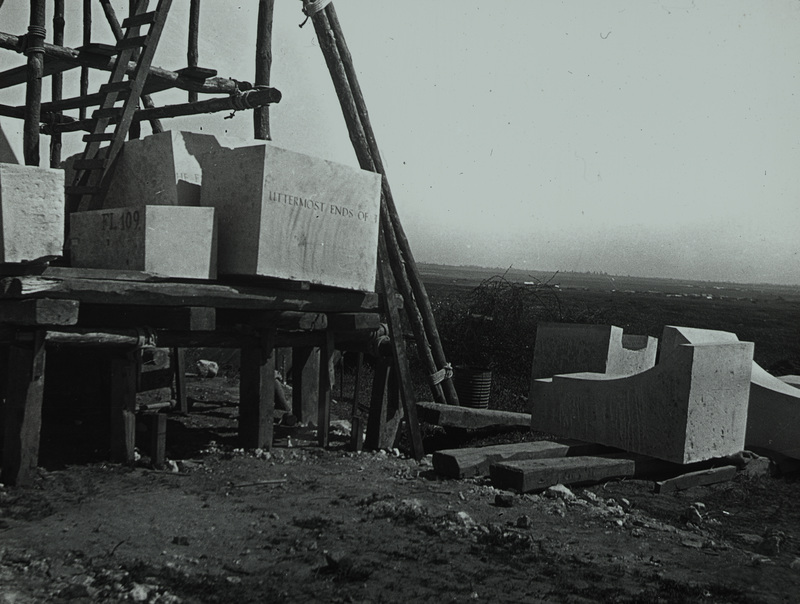 Located at High Wood in an area known as Le Haut de la Justice, the New Zealand battle exploit memorial is situated at the centre of a circular junction of three roads to Flers, Courcelette and Longueval, 1km to the south.

By 1920, the initial approval to construct a memorial in the vicinity of Longueval and Flers had been granted. Land for the site was initially gifted to New Zealand, which in return presented the commune with a tractor and plough to assist with its recovery. However, bureaucratic ‘difficulties’ led to the New Zealand government purchasing the land outright in 1922.

The French inscription translates as "The New Zealand Division, after gaining this position as their first objective, launched from it their successful attack on Flere, 15 September 1916".

Seager’s design, submitted to the government in January 1921, was approved by the Cabinet in April. The battlefield memorials at Longueval, Messines and Gravenstafel are all of a similar design with some minor differences according to each site. Each is a square obelisk that curves upwards from a projecting base and features a carved wreath and a projecting tablet with a New Zealand badge on the front of the monument. New Zealand sculptor Alexander Roderick Fraser (1877–1953) designed the badge and the carved wreath to adorn the top of each of these monuments on the Western Front. The circular badge has a fern with a laurel-leaf border, over two crossed taiaha (a staff-type weapon) and a stylised kōwhaiwhai (painted scroll ornamentation) pattern.

At Longueval, debris from the battlefield was used to reinforce the memorial’s concrete foundations, which needed to overcome a weakness in the soil caused by shell-fire.

The Pathé newsreel of the unveiling of the Longueval memorial on 8 October 1922.

Resting on a circular base of three steps, the memorial was originally ringed by a gravel path, a chain and stone post fence, and a garden of indigenous New Zealand plants, including Veronicas (hebes) and ti-trees. On the the land over the surrounding road, Seager had planned for more New Zealand shrubs and trees, including poplars, but these were never planted. The contractors for the monument were Messrs Fenning and Whiting.

The memorial was unveiled on 8 October, 1922. French and IWGC officers, Somme community leaders, visitors and villagers were led in a procession by local schoolchildren from Longueval church to the memorial. Sir Francis Henry Dillon Bell, the New Zealand Attorney-General, unveiled the monument, and two French priests, translated by the Rev. Mullineaux, performed the dedication. After the speeches concluded, floral wreaths were laid at its base and the official party was invited to luncheon in the Longueval town hall. Among the New Zealand visitors were Hester and Samuel Hurst Seager, the High Commissioner and his wife, and Mrs A. A. Martin, a widow from Palmerston North whose husband was fatally wounded at Longueval.

The following inscriptions are on the front of the memorial’s shaft: In Honour of the Men of the New Zealand Division. First Battle of the Somme, 1916.

On the back, the same inscription is written in French. On one side the inscription reads: The New Zealand Division, after Gaining this Position as their First Objective, Launched from it their Successful Attack on Flere, September 15th, 1916. 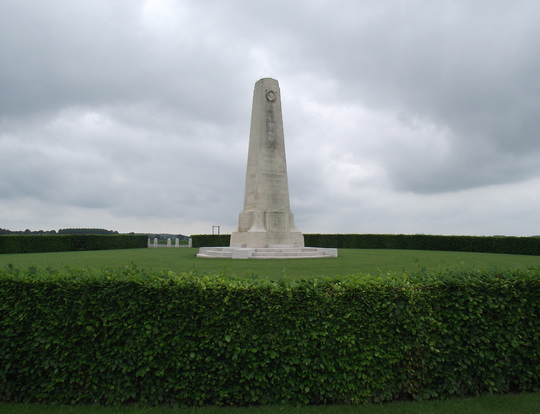 The New Zealand battle exploit memorial at Longueval in 2018.