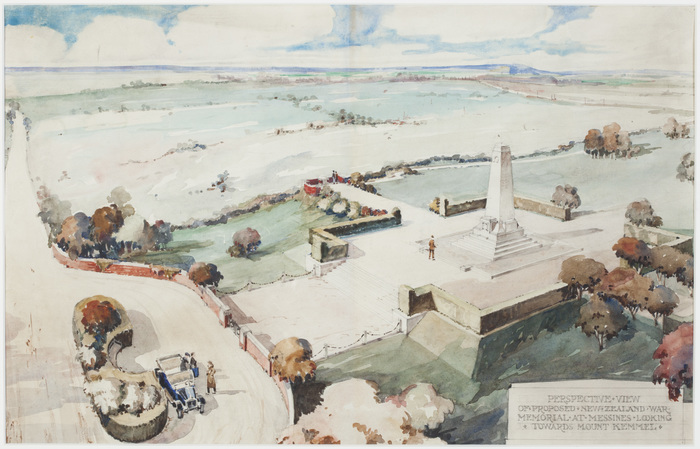 Seager's early watercolour perspective of the battlefield memorial at Messines.

The New Zealand battlefield memorial at Messines commemorates the New Zealand Division’s capture of the Belgian village from the German 26th Division. It is situated next to the road where the New Zealanders advanced towards the Germans, and the site is bordered by two lines of German trenches to the east and west.

After initial plans to build the memorial in the Messines town square were dropped, a four-acre section on a rise outside of the town was chosen in 1921, southwest of the Messines Ridge. About 500m north is the Messines Ridge Cemetery where 800 missing New Zealand soldiers are commemorated on a separate memorial. 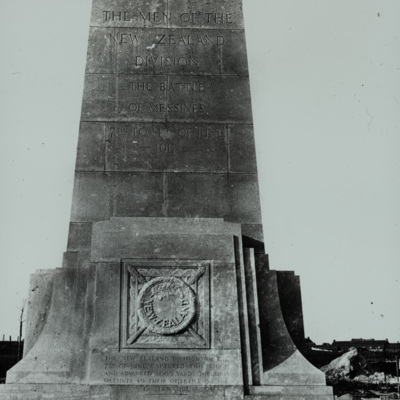 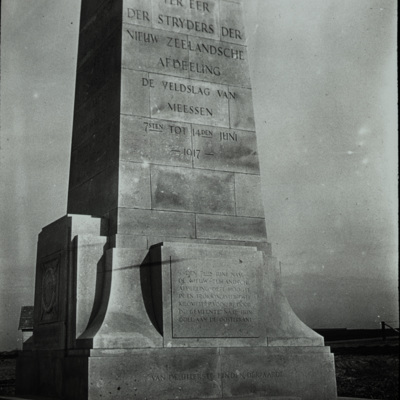 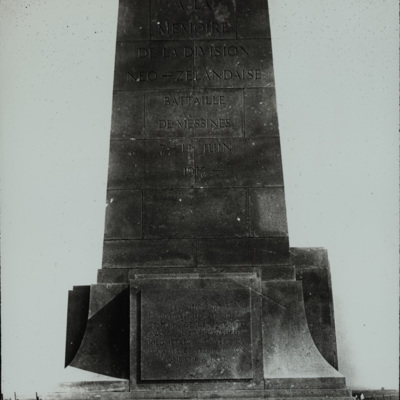 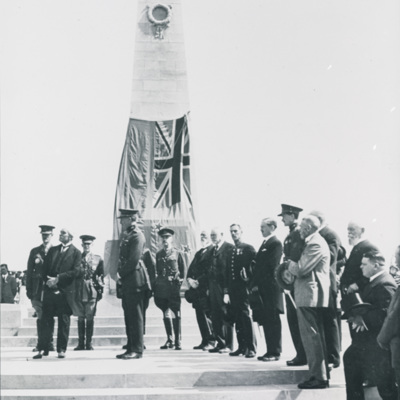 The rural location suited Seager’s purposes of creating a tranquil setting for the memorial, and encouraging its use as a place of quiet contemplation. The large size of the site allowed Seager to create a specific approach from a carpark that leads visitors between the remnants of the German trenches to the front of the monument. This is a square obelisk, similar to that of the Longueval and Gravenstafel monuments, on a square base of seven steps, and is just over 10m high.

Construction began in the summer of 1923. Stone for the three closely-related memorials was sourced from the Nabresina marble quarries at Trieste in Italy. After being cut and prepared at the quarry, 120 tons of limestone for each of the three obelisks was transported to Ypres by train, then carried by lorries to the site. The contractors were Messrs Fenning and Co. Ltd. of London. 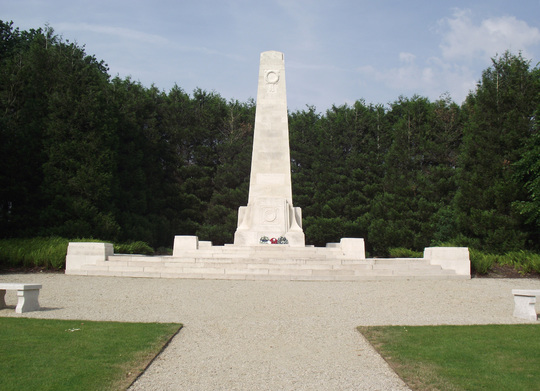 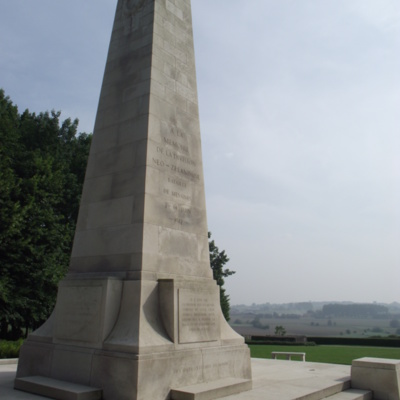 The side of the monument with the French translations of the inscriptions. 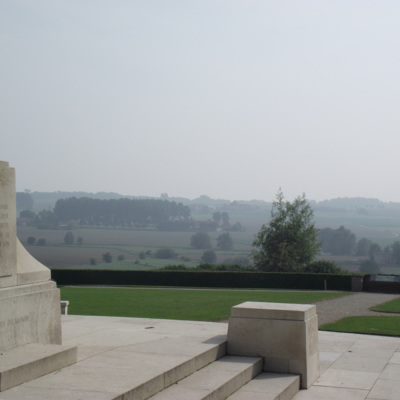 View of the hills where the New Zealanders approached the ridge.

Seager’s landscaping plan for Messines was highly detailed and incorporated remnants of the German trenches at the eastern and western boundaries of the section, including two intact pill-boxes (concrete guard houses) at the entrance, which were converted into seating areas. Originally, Seager planned to accommodate visitors with a turning circle for motorcars at the side of Messines Armentiers Road (now called Nieuw-Zealanderstraat).
As with the other Western Front memorials, a list of New Zealand plants that could cope with the European climate was prepared by David Tannock, director of the Dunedin Botanic Gardens. Broom, gorse, silver beech and juniper trees were planted behind the memorial, with New Zealand shrubs arranged around the southwest face, including native rockplants, olearias, veronicas and flax.

On 1 August 1924 the memorial was unveiled to a large crowd by King Albert I of Belgium and the dedication was made by Lieut. Col. The Reverend Frank Dunnage of Christchurch. In addition to Belgian and New Zealand officials, Messines Ridge veterans, and the people of Messines (including 250 schoolchildren), 260 Belgian soldiers formed a large guard of honour around the crowd.

The following inscriptions are on the front of the memorial’s shaft:

The Pathé newsreel of the unveiling of the memorial on 1 August 1924.

On the left and right-hand sides these inscriptions are repeated in Flemish and in French. On the tablet on the back of the memorial: The New Zealand Division, Auckland, Wellington, Canterbury, Otago