While the Imperial War Graves Commission (IWGC) continued the enormous task of burying and permanently commemorating the dead, questions over how to mark the military achievements of units were raised soon after the Armistice. In 1919, the New Zealand government sent a committee to join the British Battle Exploit Memorials Committee, which was set up to consider the claims of countries who wished to build war memorials on the sites of significant battles.

The New Zealand government approached architect Samuel Hurst Seager in 1920 to design five memorials for locations where the New Zealand Expeditionary Force and the New Zealand Division had achieved some success on the battlefield. Between 1921 and 1925, he researched, designed and oversaw the construction of the memorials at Chunuk Bair, Longueval, Messines, Gravenstafel and Le Quesnoy.

A keen photographer, Seager carefully photographed the development of each monument and produced over two hundred images of the process. In order to project the images, he made lantern slides from the photographs, which he later screened in a series of lectures during a tour of New Zealand in 1926, in association with the Department of Internal Affairs.

In 1927, Seager donated his collection of some 250 lantern slides of the war memorials to the government, in the hope that they could be loaned to returned servicemen's organisations upon request for their own screenings. 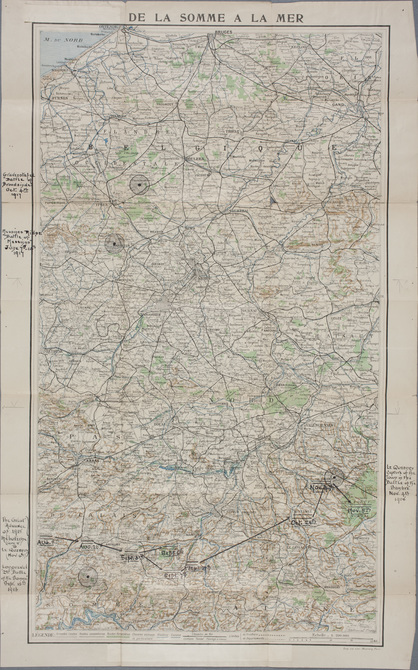 Seager's annotated map showing the locality of the battlefields in France and Belgium where the four memorials would be built.

I. The Gallipoli Campaign →
Introduction