The centrepiece of the battle exploit memorial at Le Quesnoy is the bas relief sculpture placed opposite the Garden of Memory. The sculpture brings together the ideas of four different artists: Fortunino Matania, Seager, Alexander Fraser and Félix-Alfred Desruelles. 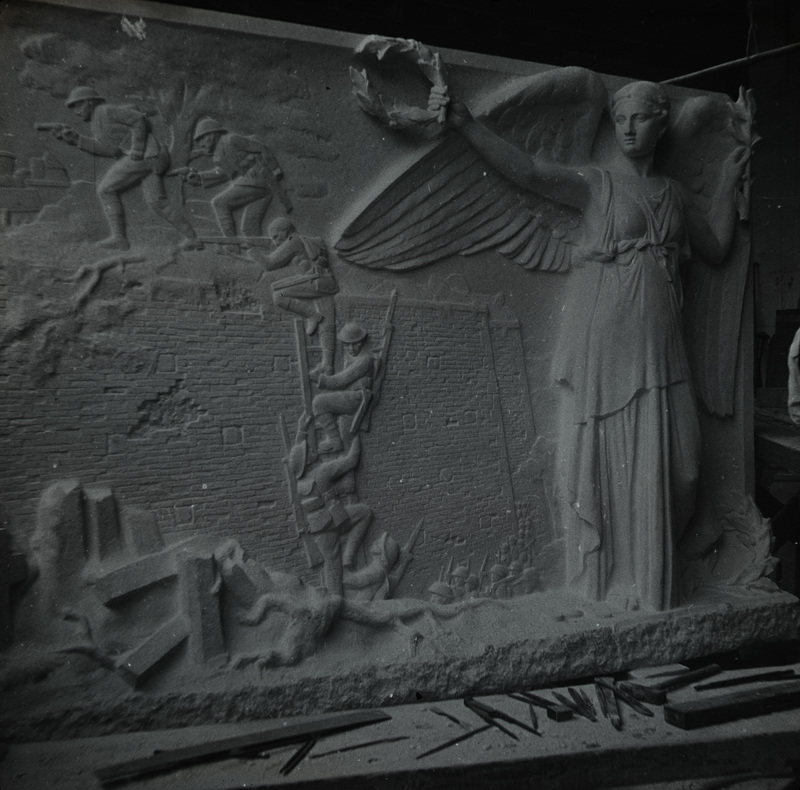 The sculpture for the battle exploit memorial at Le Quesnoy in the Paris studio of Félix-Alfred Desruelles, c.1923.

Seager, in consultation with Fraser, developed the composition from an illustration of the New Zealand Division’s liberation of Le Quesnoy that was painted by Italian artist Fortunino Matania (1881–1963). The illustration was published on 18 January 1919 in the London magazine The Sphere, for which Matania had been an illustrator since 1904. His representation of the small band of New Zealanders scaling the wall with a ladder was adopted for the sculpture, surrounded with a simple aedicule designed by Seager.

Fraser produced a clay model of the working design for the government’s approval in 1922, and his involvement with the sculpture ended here. While he was keen to have Fraser produce the final sculpture, Sir James Allen considered it an act of friendly cooperation to select a French sculptor. This came at the suggestion of the mayor of Le Quesnoy, Daniel Vincent, who was also Minister of Public Works in the French government, and had been instrumental in gaining the military’s permission to make alterations to the medieval rampart for the project. 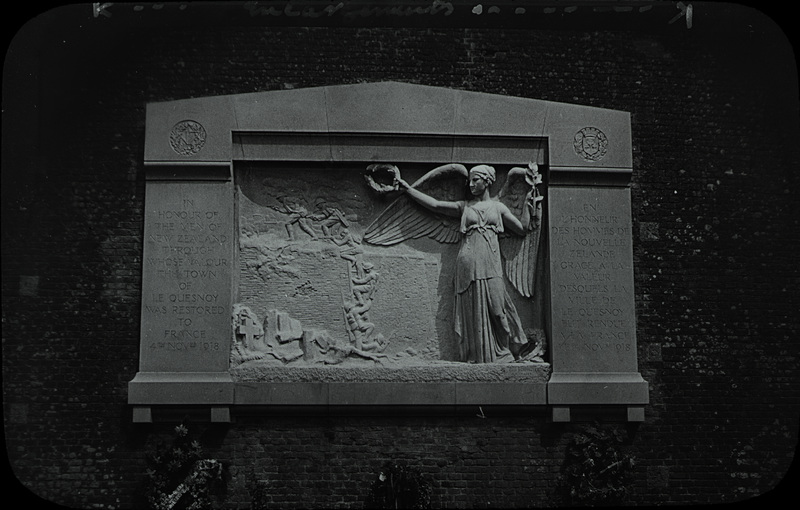 The sculpture in situ at Le Quesnoy on the day of its unveiling, with wreaths hanging beneath.

Sculptor Félix-Alfred Desruelles produced the final work and added the figure of Peace Victory, who breaks a sword beneath her feet and lifts a victory wreath over the soldiers. To the left of the scene, amidst the rubble caused by the devastation of war, is a small cross to mark those who fell during the capture. Two carved badges above the inscriptions also represent Le Quesnoy, with the coat of arms and a wreath of oak leaves, and New Zealand with a wreath of ferns.

Although Seager was critical of the war memorials depicting busy scenes of active battle, in what he called the “snapshot” type of sculpture, the location and circumstances surrounding the original event demanded a different approach from that used at the other battle exploit memorials. Here, his strictures on the dramatic ‘freeze-frame’ approach were outweighed by the fact that the sculpture directly reminds us of an action that took place on the same wall, near to where it was to be installed.

Both Fraser and Desruelles have their names inscribed in the bottom right corner of the sculpture. One of New Zealand’s official war artists, George Edmund Butler, also depicted the scaling of the ramparts in his painting Capture of the walls of Le Quesnoy (1920). Butler located the action at the exact spot where it originally took place, some 20m north of the New Zealand memorial. 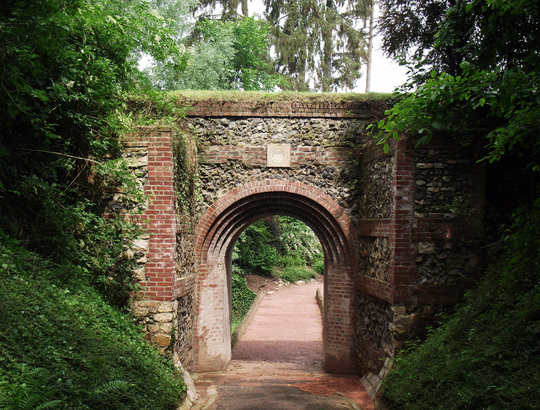 The archway made especially for the path to the New Zealand battle exploit memorial and the Garden of Memory at Le Quesnoy. Sculptor Alexander Fraser created a small plaque with a badge of New Zealand ferns above the arch.